That’s right, it’s getting close to Halloween and creepy characters start to rear their *not-so-pretty* heads. It’s also the month of my little pal Brennan’s birthday, he turned 4 last week. He has a very vivid imagination, and is currently obsessed with all things Pirate. His party is this coming Saturday, and it is, of course, a pirate themed party. He has had a collection of gold and silver coins, or treasure, for quite some time. They get buried and dug up from the sandbox several times each month. I played “pirate ship” with him early in the summer and we had to carry our treasure in a Glad-ware container. Not very pirate-y. So, I thought, he needed a treasure chest. I bought this unfinished one at Michael’s and I got to work: 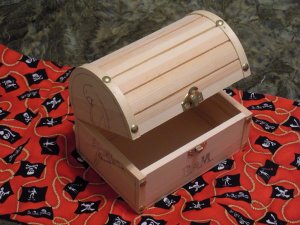 The sketches on it are mine, it was pretty much a blank slate. Here is the finished product I gifted to him last night, along with a pirate hat, flannel eye patch, some new pirate coins, a few tattoos, and a 3×5 pirate flag that my sweetie found at Menard’s, that Brennan’s parents will be proudly flying this weekend!

Near the clasp is his initials with a skull and crossbones insignia. On one end is his very own pirate, and on the other, silver and gold crossed swords. Yes, I free-handed the drawings/paintings on it, that B.F.A. degree comes in handy once in a while! It’s lined with pirate flag fabric, applied with Mod Podge.

His reaction was worth all the effort, time and expense (although, that was quite minimal). He had to find a special place to “hide” (store) his “very special treasure chest”, his words, :-> !! The “real” pirate flag was a huge hit, too! It’s easy to impress someone who is four, no matter how worldly and brilliant he is!

A touch of autumn from my window sill: 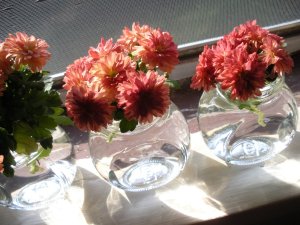 Mum’s I trimmed to bring inside for some color…don’t you just love the reflections from those glass jars?

and from my brother-in-law’s garden: 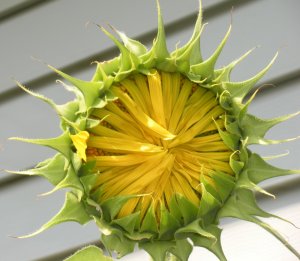 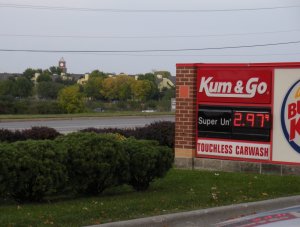 That’s right, folks, gas dipped below $3.00/gallon on Sunday. Oh happy day! Another reason for you to come here, for this….!

6 thoughts on “Parrots, swords and skulls–oh my!”