This past weekend, I kept a promise to one of my favorite six-year-olds.  Last year, at a church picnic, we saw a rock climbing wall.  He thought he might want to give it a try, “next year, when he was bigger…”  I told him next year I would do the rock wall with him.  So Saturday, he and I did this:

My arm muscles are still feeling it, four days later.  Let me just tell you, it’s more difficult than it looks. (Unless you have super human upper-body strength. Which I do not.)  After four attempts to climb the 36′ wall, we spent an hour playing one-on-one basketball.  I’d say I definitely got my exercise for the day.
While I could have spent the day at home sewing, I spent it with a six-year-old who decided hanging out with his Aunt Doris was “really pretty cool”… he even asked if we could go back to my house when it was time to take him home, “just so I can spend a few more inches of time with you… pleeaaasseee?” He can play the heart strings just as well as he did when he was three. Time well spent, I’d say.
Last night, with the help of my sweetie doing the pressing of my pre-washed fabric…

I managed to cut out a new quilt… 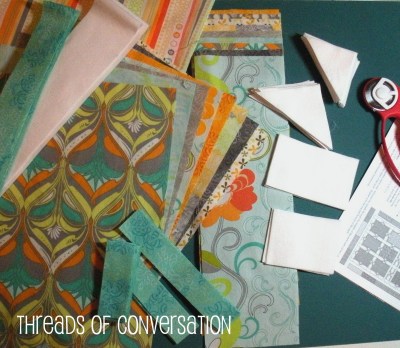 I’m making this as a store sample for the shop, out of a pattern from Living Large 2, by Heather Mulder Peterson.  It’s been quite awhile since I’ve cut out a quilt like this, you know: cut two strips by wof…cut into 15 4″ squares…cut in half diagonally twice… cut 36 1 3/8″ x 3 1/2″ rectangles… cut 20 1 3/8″ x 4 3/4″ rectangles….  etc., etc.
People that sew with me at retreats and such know that I have an issue with repetition.  I get bored easily.  This will be a good vacation project for me, chain-piecing mindlessly while sitting by the lake…

4 thoughts on “A Week of Progress”