At some point about midway through retreat last weekend, everyone decided on something to challenge themselves.  Either a sewing skill they had never tried, or one they were uncomfortable with, learning a new craft or technique, or just stepping outside the box.  It’s always good to push yourself a little, right?

Stephanie chose curved piecing using her new Quick Curve Ruler (see those awesome Urban 9 Patch blocks?).  She also brought along an amazing medallion quilt for show-and-tell, and her tiny duffle bag made from Lucy’s Crab Shack scraps was the envy of everyone of us! 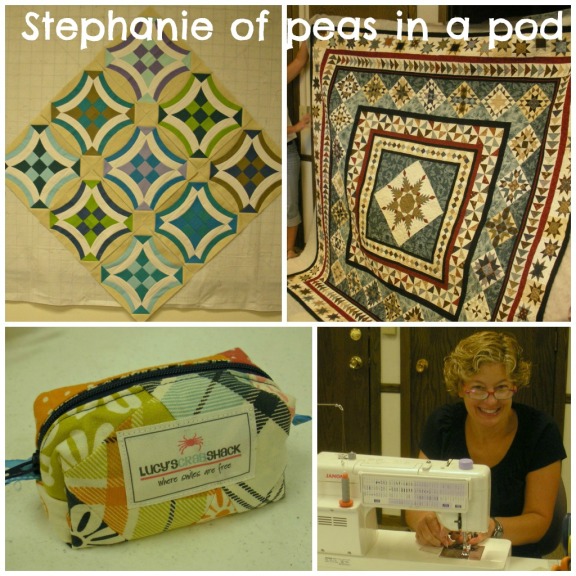 Amanda challenged herself to learn how to put in a zipper (taught by Terri).  She quilted her Oatmeal quilt (the entire thing) using the cursive e design, and shared her 36 patch quilt that she was making blocks for at last year’s retreat, and she made the cutest little fabric buckets (we each took one home!): 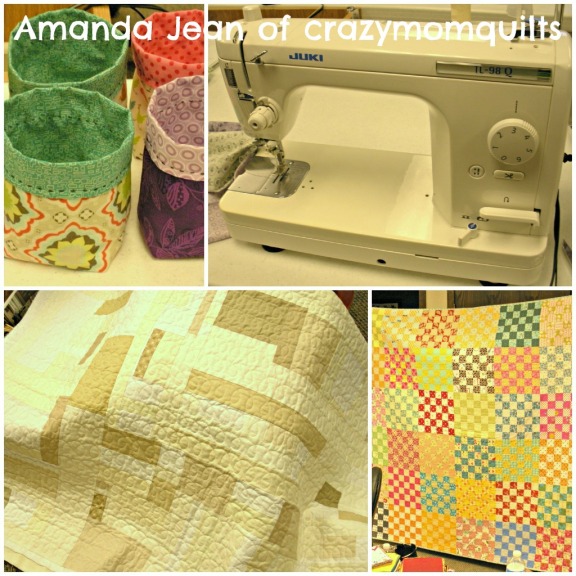 Cindy flew to Minnesota from California for retreat, along with her favorite Singer Featherweight (ahem.  it’s my favorite, too).  She has the most impressive selvage camera strap–seriously, what a great use of SCRAPS!  And her llama quilt blocks are truly awesome!  Cindy’s husband (a Minnesota native) joined her on Sunday and they were spending the rest of the week driving around Minnesota visiting family.  Cindy challenged herself to try free-motion quilting–and she liked it! 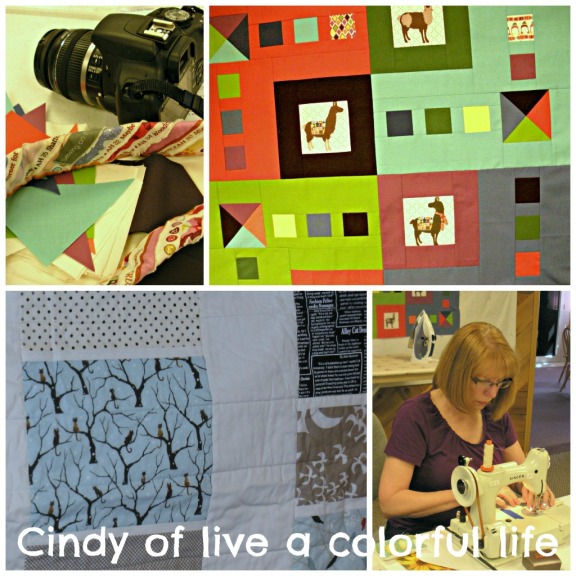 Mary’s challenge was trying crochet, she was teaching herself from a book she won on Cindy’s blog last week–studying and learning with all that activity going on around her!  She brought along an intricate piecing project that she hadn’t touched since February, that’s it in top left photo–she nearly completed the top and my photo does not do it justice! 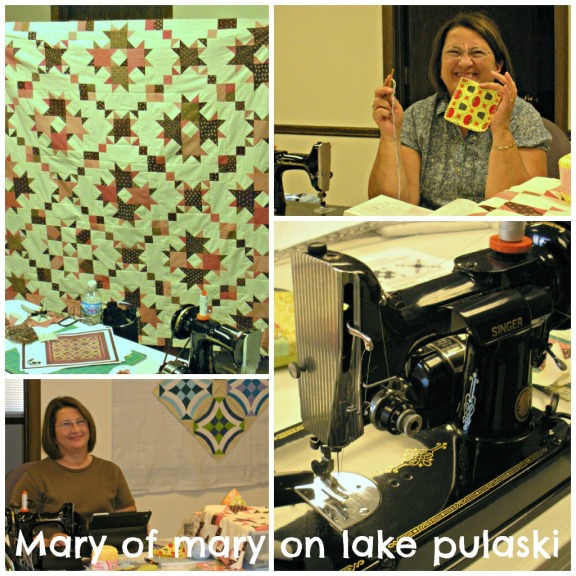 Terri is back in school, studying graphic art and design.  She doesn’t have a lot of time to sew these days, so she took full advantage of her three days of sewing time.  She made two patchwork rugs, a scrappy pincushion, a tablecloth, table runner, a giant pincushion, a wrist rest and I’m guessing several other items I forgot about already!  I don’t recall what she challenged herself too, but no worries, there was no moss growing on her sewing machine.  😉 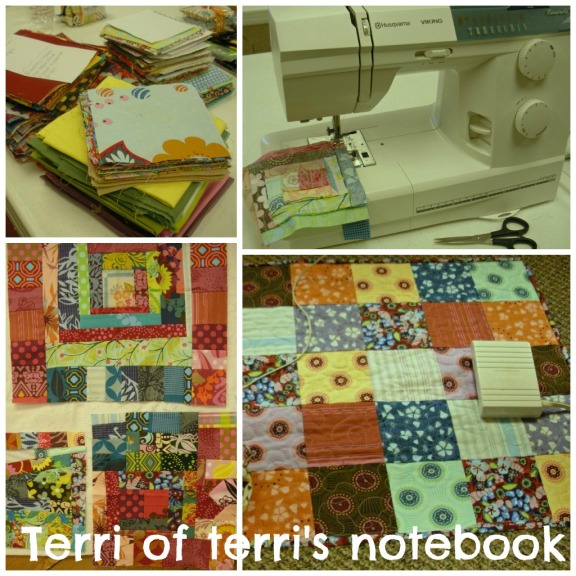 Rene flew in from the Pacific Northwest to join us, and brought along three beautiful show-and-tell quilts, including the peace sign quilt same made for her first grandson, who is just a few weeks old.  She worked on a shot cotton quilt, with fussy cut cowboy (and cowgirl!) fabric, and even challenged herself to go 3-D with a pincushion project after some coaxing from the rest of us. 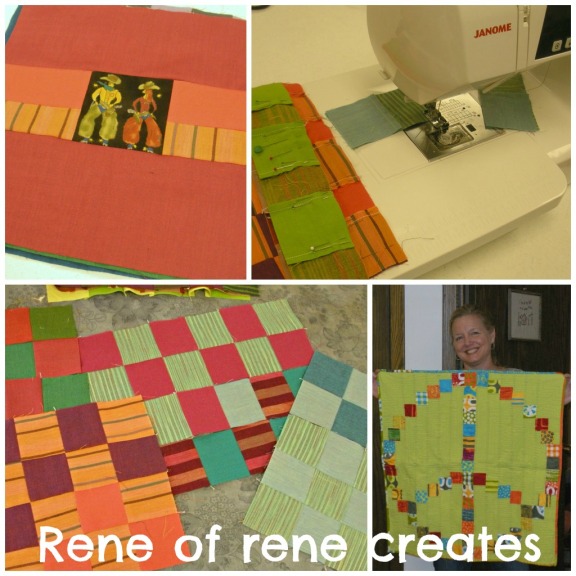 Michelle, Rene’s little sister, joined us again this year from Georgia, and she still claims to be a new quilter, but this girl has made some serious strides!  She even shared a quilt this year (a challenge for her), the mini quilt in aquas and browns that she made for her sister’s birthday, that blew us all away–it’s beautiful!  And the fabric she bought at Grubers last year made a return trip to Minnesota and were turned into some very pretty window blocks. 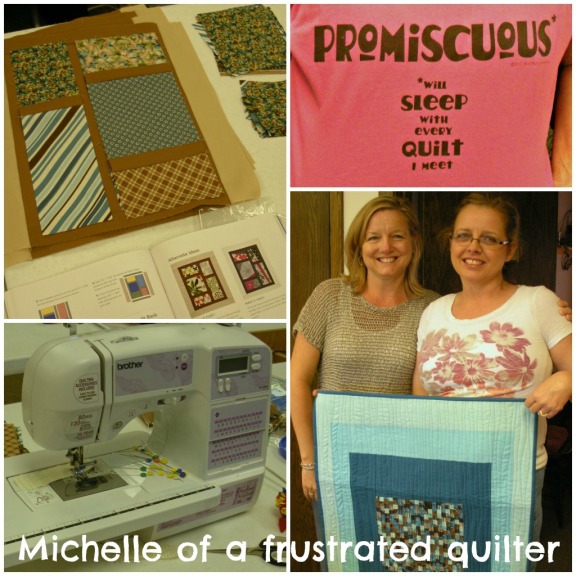 I worked on my Love in a Mist Bee quilt top (it may actually be a quilt one day), cut oodles of 5″ hexagons for my niece’s quilt (thank you, Go! Cutter), paper-pieced blocks for a table runner from my scraps… and my challenge was to re-learn Adobe Illustrator, or at least enough to make diagrams for the newest quilt pattern.  I was grateful to have Terri in the room to help when I got stuck.  Diagrams drawn and complete! 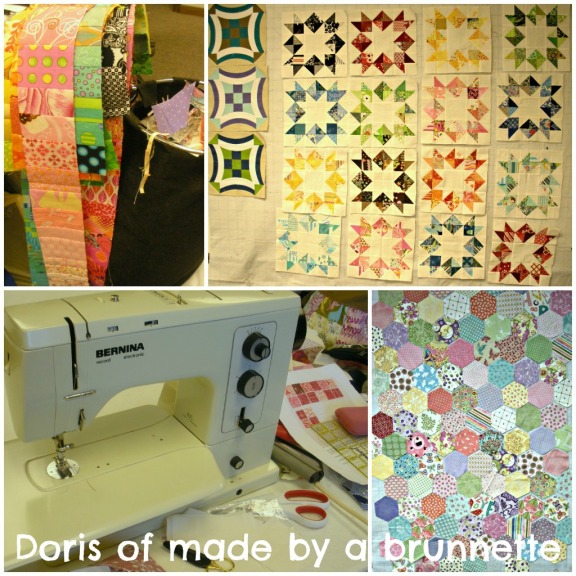 13 thoughts on “A Challenge”