It’s no secret I love a weekend of sewing. And especially a weekend of sewing with quilty gals. This past weekend was certainly no exception. We talked. We laughed. We ate. We sewed. We ripped. We cut. We ate. We napped. We shared. We ate some more. Maida, our chef for the weekend did a great job of keeping the hunger pangs away. I’m doing extra workouts this week to make up for it.

Our retreat takes place in the cafeteria of an elementary school. Here is my table of quilters:

That is my Pfabulous Pfaff to the right of center, there. It worked like a champ this weekend after visiting the doctor two weeks ago. I made two more Nearly Insane (UFQ #20) blocks (remember, my goal is two per month)– 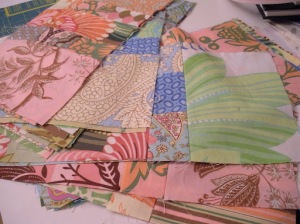 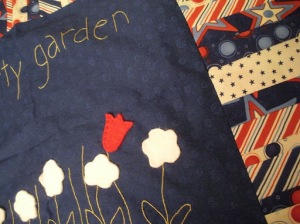 And I made a gift for a little guy, but I can’t post pics yet because it hasn’t been gifted yet…

There is always show-n-tell at a retreat, everyone gathers around and oohs and ahhs and takes pictures and asks questions. This is Ann’s “tumbling blocks variation”:

Mom’s Blooms for Annabelle quilt, which will have hand applique in the background spaces and extra borders to make it bigger, but after ripping it apart A LOT, the main center is finally done. Note the smile.

Cathy’s scrappy stars for a kindergarten classroom board, made from all donated blocks and fabric scraps: 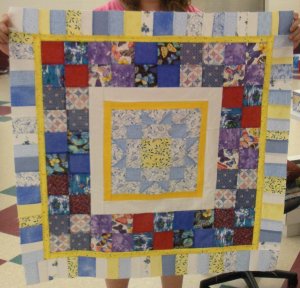 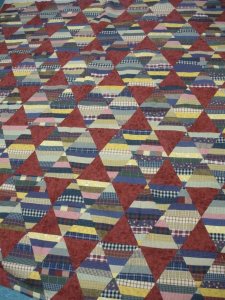 And occasionally, a rest is needed after all that sewing, quilting, ripping, eating, laughing, and talking. Here is Lynn taking a nap under one of her creations : 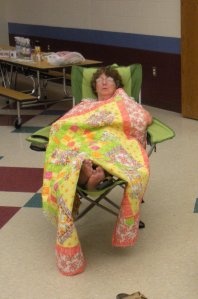 It has ninety eight 6″ blocks. That’s right, 98. No two are alike. It measures 90 x 90. I started making one (a Salinda Quilt, or a Nearly Insane Quilt) in February 2004, as part of a year-long class. Imagine my surprise and delight when I opened this month’s issue of Australian Quilters Companion…

A small group of quilters, the Kilmore Kwilters, each made there own Nearly Insane quilt as a challenge put to them by one of there members. The article says at least 14 of them were to be on display at the quilt show in Victoria last month. Oh, how I wish Iowa was not so far from Australia. I would have loved to see them in person!

These blocks are all so different, and drafted by a 19th Century Amercian woman we know very little about. But, my she must have been intelligent. A wiz at mathematics. Had a great eye for color. She must have been extremely creative. Patient. Resilient. Determined. Above all, determined.

The quilt got the name Nearly Insane by Liz Lois, who researched and drafted the block patterns for a book she published in 2003: 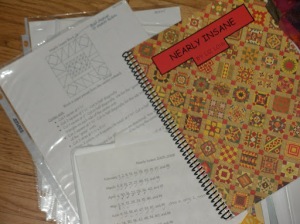 The book tells her story of making her own Salinda/Nearly Insane Quilt over the course of three and a half years, along with five other women. Her pattern book has a line drawing for each block, but no instructions on how to construct each block, only general instructions for making the quilt. The class I took, was taught by a wonderful quilter, talented beader, and all around fabulous person, Lisa Caryl. Lisa redrafted each block and developed paper piecing foundations for many of the blocks for us.

ORIGINAL PURPOSE: Taking a twelve month class where I would learn to paper piece, English Paper Piece, and almost everything wise I now know about quilting. Getting to spend time with my new friend, Toni. Getting to make a great new friend, Nan. Getting to know and work with Lisa.

CURRENT STATE: I have 50 blocks made, out of 98. Over half way there! I’ve kept all my patterns and completed blocks in this giant three-ring binder through the process:

Here is my progress sheet, I’ve colored in the blocks I have done (I think I’m a little behind on coloring them in…) There’s my English Paper Pieced star, a block I should not have used light thread on, because my stitches now show. Oh well. Live and learn.

A few more of my completed blocks. They are all made of batiks. This is when I fell head over heels in lust with batik fabrics! I love that one on the bottom right…

Some are pretty challenging. Block #18, here is mine…has 229 pieces in it. That’s right, I counted ’em ’cause I though Liz Lois had to be mistaken. Nope. Keep in mind this is a 6″ square blocks. Those are some seriously small half-square triangles.

REASON FOR NOT FINISHING IT: It has 98 six inch blocks. ’nuff said.

Here a few more of my blocks: 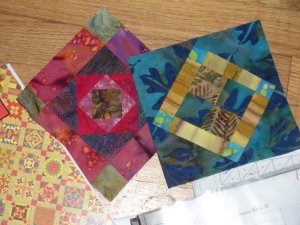