My mind, the new business venture that’s in the works, and certainly this blog, are all creative machines with multiple interests.  About fifteen years ago, a friend called me a ‘jack-of-all-trades, but Master of none’.  It was the first time I heard the expression, and I thought it amusing at the time it was said, but upon further reflection, I came to see it as a slight insult.

Even though my primary interests now revolve around fabric and quilting–and have for many years now– I could just as well have written a lifestyle blog, an interior design blog, a travel blog, an art blog, a foodie blog…. All things I have an interest in.  That’s why, sometimes, my writing ventures a little off the quilting path.

I’ve always had diverse interests in music, what I liked to read, different craft techniques, different art mediums… I adore antique and vintage furniture and decor; but crisp, cutting edge contemporary design floats my boat, too.  I’ve always thought being, or sticking to, one thing rather stifling!  A characteristic of the creative mind–but certainly not a flaw.  That said, many times over the years I’ve found myself apologizing for not being more focused, more goal-oriented, more “left-brained”.

This morning, I watched a public television program about a group of craftsmen and engineers in Britian who were trying to construct, from Leonardo da Vinci’s never-executed sketched designs, a catapult and a flying machine; it was fascinating.  Leonardo filled sketchbooks with designs and ideas that were never executed, either due to lack of funding or lack of a patron, but often he abandoned projects or ideas so he could move on to the next great idea.  Sound familiar?  I don’t think anyone today would argue that Leonardo da Vinci was not a success, most would agree he was a genius.  He lived just 67 years, and yet he made vast contributions in the areas of painting, architecture, music, mathematics, cartography, civil engineering, hydrodynamics, and science–obviously he mastered many trades during his relatively short lifetime.  His creative curiosity was hardly a character flaw.

That program reminded me that my occasional inability to stay focused on one task, or one project, or one idea, isn’t necessarily a negative thing.  Sure, I do admire those unique people I’ve met that knew at age ten exactly what they wanted to do with their lives (and did it!), while I’m still uncertain in my forties what I want to do with my life; but would I trade my adventures, my creative experiments and the people I’ve met as a result of these explorations?  Probably not.  (Incidentally, at age ten, my answer to the question of ‘what do you want to be when you grow up?’ was always “an Artist”) 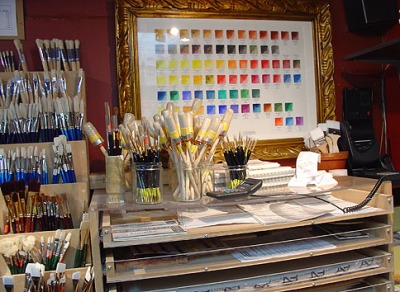 Why do we have to define ourselves as something?  Why should we pigeon-hole anyone or any thing?  Anna Maria Horner had a fun Q & A with her intern, also called Anna, an undergraduate design student.  AMH asked her what she hoped her life’s work would be, dream of dreams.  Her answer was superb:


That’s something I struggle with on a daily basis….I’d like to be able to say at the end of my life that I have spent my days doing the things that I love, whether its photography, painting, designing or whatever, I hope I can look back on my body of work and not see it as work, but rather what I had a passion for. It might mean that I have to choose only one of those (or none of those) to make ends meet, or build a career, but as long as the bill-paying work doesn’t overshadow finding enjoyment in what I do, then I will have lived the dream.


How smart is that for a 19-year-old?  I was a very mature 19-year-old, having had a lot of responsibility placed on me at an early age, but my future goals were certainly not that mature.  I’m now 42, and I’m just figuring out what that smarty-pants intern stated so very eloquently.

quote from the diary of a Pioneer woman: