So I promised the story about the fabric, patterns and vintage linens from the estate sale I went to a few weeks ago, so here it is. My friend Toni has become hooked on tag sales , estate sales, and auctions, and because we like the same types of vintage primitive things and are both quilters and love vintage fabric, I get (easily) sucked in to joining her on many of these adventures. A few weeks ago, she called me while I was at work to tell me she was at an estate sale in the neighborhood, and I “have to get over here! They have all kinds of fabric and old patterns and great stuff!” She and her husband were there buying kids books, fabric, notions, and all kinds of goodies. The yard sale was at the estate of a retired Home Economics teacher who had passed away in March, her two daughters were selling her collection of books and sewing paraphenalia. I took a break and went, there were hundreds, HUNDREDS of patterns (Simplicity, McCalls, Vogue, etc.), mostly women’s clothing patterns from the 70s and 80s. And yards upon yards of fabric. I bought a few patterns for a quarter each, some buttons, small notions and bags of batting. While I was getting ready to leave, I struck up a conversation with Marti, one of the daughters, about what they intended to do with the leftover patterns after the sale and pleaded with her not to just toss them She took my number, I thought I could put them in touch with Pattern Rescue, or one of the vintage patterns internet stores. They called a few weeks later, we played phone tag a few times, and I gave up on getting back in touch with them. They called again two weeks ago, they were closing on their mom’s house the folowwing Monday and everything had to go. This was the week of the flooding here in Des Moines. I met them the next day at the house, loaded all 579 patterns (YES, 579) in my VW bug and gave them $25 for the lot. They asked if I “needed” anything else. Would I be willing to take their mother’s fabric off their hands…they had less than a week to get rid of it. We loaded it (four large garbage bags of it) in my car on top of the patterns (some of it had gotten wet from the heavy rains). There was also a laundry basket of nicely clened and folded vintage linens in the house, and because I’m a sucker for old things, I asked about it, saying something like “I hope you are saving your mother’s linens yourself?!” The answer was, “no, we kept what we wanted, but we have limited space, so we are trying to sell these”. Someone was supposed to have come to buy them the day before, but didn’t show. Jennifer, Marti’s sister, said, if you will use them or find a good home for them, you can have them. So this is what I left the house with, in a completely jammed packed VW Beetle, (which I wish I had thought to snap a photo of). I spent the last week and a half, washing, measuring and folding the fabric…all 212+ yards of it…getting it ready to sell on my own yard sale this fall. That’s right, 212 5/8 yards of fabric, plus 7 fabric panels (craft panels) and did I mention, there were 198 individual pieces of vintage linens from hankies to aprons in that laundry basket of treasures?! I even used about 3-4 additional yeards of fabric that was stained or flawed to cut up to make ties for all of the fabric bundles you see below! This is a shot of the fabric bundled for sale on my sofa (there is one bolt of calico, 18.5 yards!), at the right is the stack of linens. It may be a few weeks before my living room is back to normal… 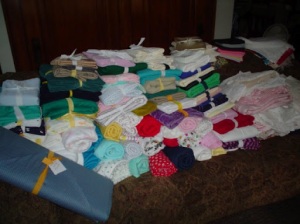 But it feels good to be saving someone’s “precious stash” after they are no longer here to take care of it.

The patterns are being posted on eBay, in lots of 4. There were 579 of them, 79 had to be recycled because they had water damage from the flood/rains, Toni kept 2 of them (pillow patterns), I kept 1 of them, and we pulled out 3-4 of them that were incomplete.

It’s been a great deal of work, I’m sure I’d think twice before accepting this again, but it’s also been fun admiring the vintage pieces. I’ll eventually post photos of some of the more interesting pieces.